We look at the post-invasion state of play on Russian gas flows, what market pricing is telling us and 3 scenarios for supply volumes & market pricing.

A ‘fast market’ is a trading term for disorderly price action under conditions of extreme market stress. This is an appropriate description of the state of European gas & power markets on Thu last week as Russia invaded Ukraine.

The current environment is a difficult one in which to price risk. Fundamental drivers lose their relevance in a nervous market driven by poor liquidity, VaR shocks & transaction flows. Geopolitical shifts behind market volatility are also fast and uncertain.

In today’s article we try and put some structure around the challenge of interpreting what may happen going forward. We look at the facts we know today and what market prices are telling us. We also consider 3 potential scenarios for Russian gas flows and their impact on gas & power prices.

What do we know?

Let’s start with some important facts before we introduce any conjecture.

Gazprom delivered 177bcm of gas to Europe in 2021 by its own measure. In practice Europe receives about 20 bcm less than this once reverse flow & Turkey domestic consumption effects are taken into account. But regardless of how you measure flows, 2021 volumes are a reasonable benchmark for Gazprom’s contractual obligations to deliver gas to Europe (give or take 5 bcm).  Contracted volumes decline about 10 bcma from 2023.

Gazprom also has a 40 bcma contractual ‘ship or pay’ obligation via the Ukraine flow route.

Germany has now halted Nordstream 2 (NS2) regulatory approval. This removes the prospect of 55 bcma of additional import capacity for Russian supply (at least until there is a major de-escalation in European vs Russian tensions).  It is important to note that NS2 on its own does not guarantee more supply volumes, just greater flexibility to route Russian gas into Europe.

So a fair summary of the current state of play with Russian flows is that Gazprom is:

In this sense, the invasion of Ukraine has not disrupted Russian flows, at least not yet. In fact flows have actually increased since the invasion because spot prices have surged inducing buyers to nominate daily volume take at maximum levels.  This helped to dampen the post-invasion TTF price surge late last week.

What are forward market prices telling us?

Chart 1 illustrates the impact of escalating Russia vs Ukraine tensions across the last few weeks on the TTF forward curve. The dark green line is the closing TTF futures curve from last Thu (the day of the invasion), the light green dashed line a forward curve from late Jan 2022. 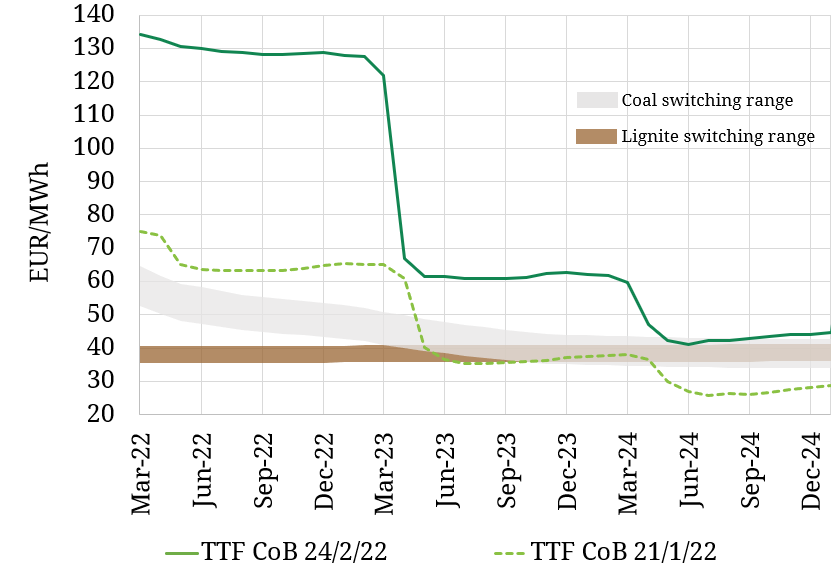 European gas prices (represented by the key TTF benchmark) are anchored by gas for coal plant switching levels in the power sector. These are shown in the chart via the grey shaded range (for hard coal plants) and the brown range (for lignite plant). If gas prices fall below these levels, then large incremental gas demand is generated from the power sector as gas-fired power plants displace coal & lignite plants in the merit order.

As tensions have escalated across the last 6 weeks, a large risk premium has opened up between forward TTF prices and switching levels.  That risk premium surged last Thursday as Russia invaded Ukraine.

While switching levels provide strong price support, there is no clear resistance level for prices on the upside. However price spikes in 2021 show evidence of more substantial demand response kicking in above 140-150 €/MWh via large industrial users of gas (& power) shutting down production e.g. for ammonia & smelters.

While demand response levels are important to understand, they do not provide a ceiling for rising prices in the case of a major supply shock. Price action in late Dec 2021 is evidence of this.

Under current market conditions it is difficult to price risk & easy to panic & lose perspective. In this environment it can be useful to consider some high level scenarios.

In order to put some structure around an uncertain future let’s consider three broad scenarios to illustrate potential Russian supply outcomes & resulting price drivers.  These are summarised in Table 1 and explained below.

Europe is Gazprom’s largest customer. The Russian economy depends on gas exports. If Gazprom fails to meet its contractual obligations (outside a force majeure type physical interruption event), it will face large legal damages claims as well as doing irreparable long term damage to its European customer base.

In our view it remains a firm basecase scenario that Gazprom will do all it can to meet its nominated contractual flow volumes i.e. to flow a similar volume to 2021.

There are however some important differences vs 2021. Nordstream 2 is for now off the table. But to counter this, European LNG imports are currently running at record high levels (although this is dependent on Asian LNG demand dynamics).

Pricing dynamics in this scenario are defined by the level of the TTF risk premium above switching levels. This risk premium surged immediately after Russian invasion as the forward market reacted to heightened uncertainty.

As long as Gazprom continues to meet its supply obligations post invasion, the risk premium will likely be eroded over time. This is particularly the case if buyer nominations remain strong given high spot prices and robust LNG import flows continue.

The risk premium across the TTF curve in Scenario 1 is strongly linked to the probability & implications of our second scenario. Scenario 2 could also temporarily interrupt Scenario 1.

This is the key scenario to understand. If Russian flows, via Ukraine or other routes, are physically disrupted the situation may become messy very quickly.  We consider the following cases that could drive a disruption scenario:

If Europe loses 40bcma equivalent of Russian flow volumes via Ukraine, it cannot replace this volume via other supply sources. If European politicians are serious when they claim they can supply themselves without Russian gas they are delusional.

A complete Ukraine route disruption would be unlikely to cause Europe to lose the full 40 bcma ‘ship or pay’ volume. Gazprom has some ability to flow incremental volumes via Poland and Turkey, but this is likely 10-15 bcma at most, leaving a deficit of 25-30 bcma.

All other sources of pipeline supply to Europe are flowing at maximum levels, incentivised by record high prices. That leaves the LNG market as the safety valve.

TTF prices would need to rise, pulling up Asian LNG prices (JKM), to induce an adequate level of (i) demand substitution away from gas into other fuels e.g. oil and (ii) demand destruction e.g. via industrial demand curtailment, in order to clear the European gas market.

On top of this there could be some major logistical challenges in getting gas to where it is needed within Europe. Ukraine route flows provide important volumes into the Baumgarten region on the Austrian border and from there down into Italy. Cutting supply via Ukraine means a major rerouting of gas is required from NW Europe which is facing some logistical challenges of its own with constraints at some LNG regas terminals.

A structural Ukraine flow disruption scenario (e.g. for months or years) is a low probability outcome in our view but would be much more extreme in terms of price impact, bigger than anything we’ve seen yet.  Except on a temporary basis, we see it as an unlikely outcome because it is not in either Russia or Europe’s interests.

However the probability of a temporary Russian flow disruption (e.g. days or even weeks) is higher. Even a temporary disruption could cause a big prompt price spike to clear the market, which may drag up the TTF curve given the resulting uncertainty in how it may be resolved. But as long as supply is restored prices will fall, with economic damage focused on the period of the spike.

The most obvious potential cause of temporary flow disruption is the risk of pipelines being destroyed as a result of fighting in Ukraine.

Another potential trigger for a temporary disruption is the restriction of Russian access to the SWIFT payments network, a response to be implemented over the next few days. A blanket cut to SWIFT would remove the ability for buyers to pay Gazprom for gas supplies which could in turn disrupt flows. But a SWIFT cut is likely to be targeted in a way that allows continuity of payment for energy, so the risk of disruption here relates to getting through a major shock to the global payments system.

A potentially more severe form of temporary disruption would be if a cornered Putin tried to temporarily  ‘weaponise’ gas supply by intervening to cut Gazprom supply and exert pressure on Europe. This would likely be the last resort of a desperate leader. It would destroy the long term viability of one of Russia’s largest export markets. But as described above it could also result in huge gas & power price spikes & demand destruction while it lasted, in order to clear the market.

This may seem a crazy suggestion to some given the geopolitical backdrop, but a negotiated outcome between Europe / US and Russia appears to be in everyone’s interest to avert an escalating war.

One of the big issues Europe faces is the economic & political damage of soaring energy prices. So it is not hard to imagine that gas supply is an integral part of any negotiated outcome.

The political challenge is that any substantial increase in Russian supply may be conditional on a green light for Nordstream 2 to commence operation (combined with Russian commitments to increase flows).  It may be very difficult politically to resurrect NS2 post invasion.

Even without NS2 there may be some incremental volumes Russia can flow via Poland and Ukraine as part of a negotiated outcome.

From an upstream production perspective, Russia probably has the capability to flow 20-25 bcma more than 2021 levels at least over the medium term, but some of this volume would require NS2 routing.  Even half of this volume would likely see prices reconverge towards switching anchor levels.

In our view this scenario is lower probability than Scenario 1, but higher than a structural disruption under Scenario 2.

The events of 2021-22 have not been good PR for gas. The reality is Europe will depend on gas as a transition fuel until enough flexible low carbon replacement energy can be deployed as we set out last week. But there is no doubt that high & volatile gas prices are accelerating the public & political momentum behind energy transition in Europe.

We look at case studies of renewable demand swings to illustrate how long duration flexibility is the next frontier on the path to net zero.
Read more
Snapshot
24 Feb 2022