European hub prices under pressure in 2015

After several years of relative stability, the European gas market has entered a more dynamic transition phase with prices under strong downward pressure since

European hub prices under pressure in 2015

After several years of relative stability, the European gas market has entered a more dynamic transition phase. Spot prices at European hubs have faced strong downward pressure since summer last year.   The threat of Russian supply disruptions provided some temporary support for forward prices in advance of the current winter. But hub price declines have extended along the NBP and TTF curves into 2015.

Overlaying the fact that European gas demand has been relatively weak given a mild winter and it appears that hub prices have held up surprisingly well in Q1.

Prices have been supported in Q1 by oil-indexed supply contract volume profiling. But as 2015 progresses, this effect is set to reverse, causing renewed downward price pressure on hub prices into the summer.

The sharp oil price declines of Q4 2014 & Q1 2015 are yet to fully flow through into long term oil-indexed contract prices. That means contract prices are currently significantly higher than hub prices. Most contracts have a six month indexation lag to oil, which provides good forward visibility of a sharp fall in contract prices in Q2 & Q3 2015 (towards 6-7 $/mmbtu). The blue range in Chart 1 illustrates the downward move in contract prices as 2015 progresses relative to NBP forward prices in green. 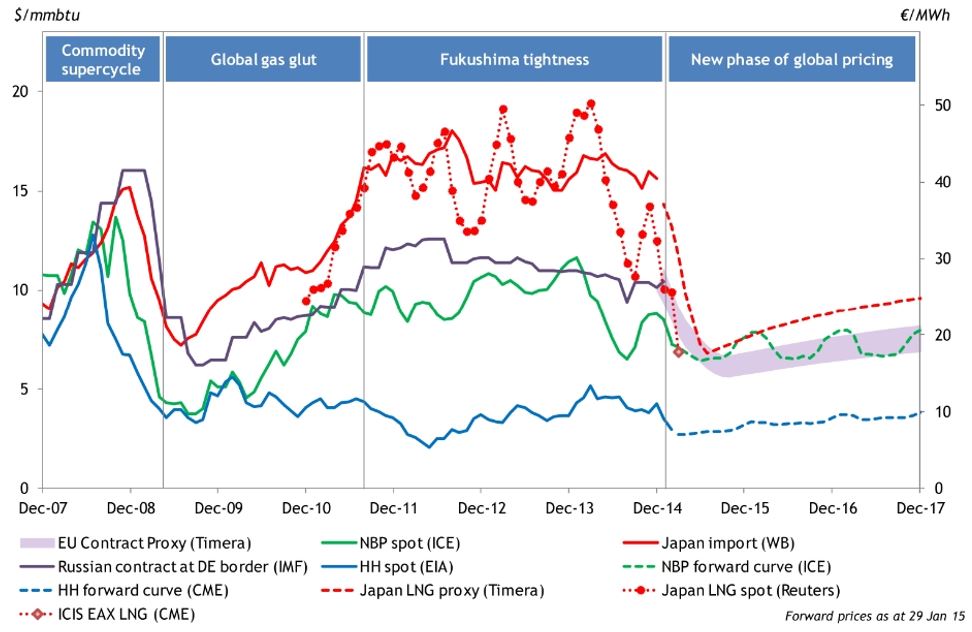 The current premium of contract over hub prices provides a strong incentive for contract buyers to profile their annual contract take.   Volume take in many contracts is currently being minimised in Q1 (given hub gas is cheaper) in anticipation of higher contract volume take at lower oil-indexed prices across the remainder of the year (once price lags feed through fully).

Volume profile optimisation varies by supply contract. While European pipeline contracts broadly have a uniform structure (e.g. annual take or pay, daily swing constraints, oil products indexation), the pricing and volume terms of individual contracts vary significantly. But while specific volume take incentives may vary across contracts, the rapid decline in oil prices has caused a sharp reduction in pipeline gas flow into Europe across Q1 to date (in the order of a 40% y-o-y reduction in Russian volumes in Jan 15).

Reduced volumes of pipeline contract supply are currently being offset to some extent by:

But the scale of contract volume profiling is definitely a factor currently supporting spot prices. 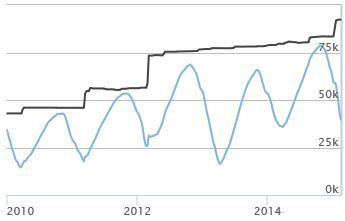 After sitting at a premium to hub prices for most of the last decade, long term contract proxy price benchmarks have actually fallen below forward hub prices for the majority of 2015 (the blue range crossing over the green line in Chart 1). This suggests the contract volume profiling dynamics described above will reverse as 2015 progresses.

Once contract prices fall below hub prices, contract buyers have the incentive to maximise contract volume take, selling any surplus gas at the hubs to secure a premium. It is this arbitrage dynamic that acts as a strong force to maintain hub prices within a range of oil-indexed contract prices. But as the year progresses, contract prices are set to swing from being a source of hub price support in Q1, to a significant drag on prices across Q2 and Q3.

There are a couple of factors that may provide some hub price support as the year evolves. The potential for earthquake related reductions in production at the large Groningen field in the Netherlands were announced last week. But the volumes are relatively small compared to the scale of pipeline contract and LNG import volumes. The Groningen reduction (still subject to political debate) is in the order of 5 bcm reduction (less than 1% of European gas demand).

In addition supply contract negotiations over recent years (e.g. with Gazprom) have resulted in increased annual take or pay constraint flexibility. This means that contract owners have a greater ability to reduce gas volume take during periods of oversupply.

But the big incremental pressure on European hubs in 2015 may come from the LNG market. Hub prices are facing additional pressure from falling Asian spot & long term contract LNG prices (the red lines in Chart 1). Lower Asian LNG prices make Europe a more attractive market for flexible LNG supply volumes. The flow of surplus LNG cargoes into Europe is likely to build into the summer as a result of:

The combination of pipeline contract profiling and surplus LNG cargoes suggests to us that the risk around European hub prices is firmly to the downside as 2015 progresses.