We set out the drivers that can boost battery project value when collocated with solar & use a case study to show the breakdown in IRR uplift.

The investment momentum behind batteries in Europe has been growing in 2020. The UK has been leading the charge with over 1GW of installed capacity reached earlier this year and a strong investment pipeline behind. But other markets such as Germany and Italy are following suit.

Co-locating a battery project alongside solar can provide a boost to battery investment case by up to 2% IRR, by creating value from an under-utilised solar grid connection.

In today’s article we look at the interaction between solar PV & batteries and the value drivers of colocation, using a UK battery case study to illustrate project IRR impact.

Co-location combines a battery storage system and another form of intermittent generation, typically solar. As batteries have a much smaller footprint than solar, they are often able to be installed alongside existing projects, making it an attractive diversification for renewable investors.

Both batteries and solar operate on a DC basis and need a DC/AC inverter. Typically both the battery and solar assets have a separate inverter, are AC coupled and set up to share a single grid-connection. Batteries can be DC coupled with solar and share a single AC/DC inverter, however this approach is generally less suitable for retro-fitting onto existing solar PV and much less common in the UK.

Despite sharing a grid connection, co-located assets should be optimised independently, rather than as a single unit. Solar generation typically has priority over the battery dispatch, with the battery operating around the solar generation profile. Average UK solar load factors are around 12%, leaving up to 88% of unutilised export capacity.

Co-location is a balancing act

Whilst co-location can materially save on capex, it can come at a cost. Co-located batteries are impacted by lower wholesale and BM energy margins compared to stand-alone batteries, as solar generation impacts dispatch.

Batteries need to be carefully sized to minimise interference between solar output and battery dispatch. To show the impact of solar generation on battery dispatch we use Timera’s colocated battery optimisation modelling framework.  Let’s consider two chart examples of how a battery dispatches against Day Ahead (DA) and Within Day (WD) power prices. 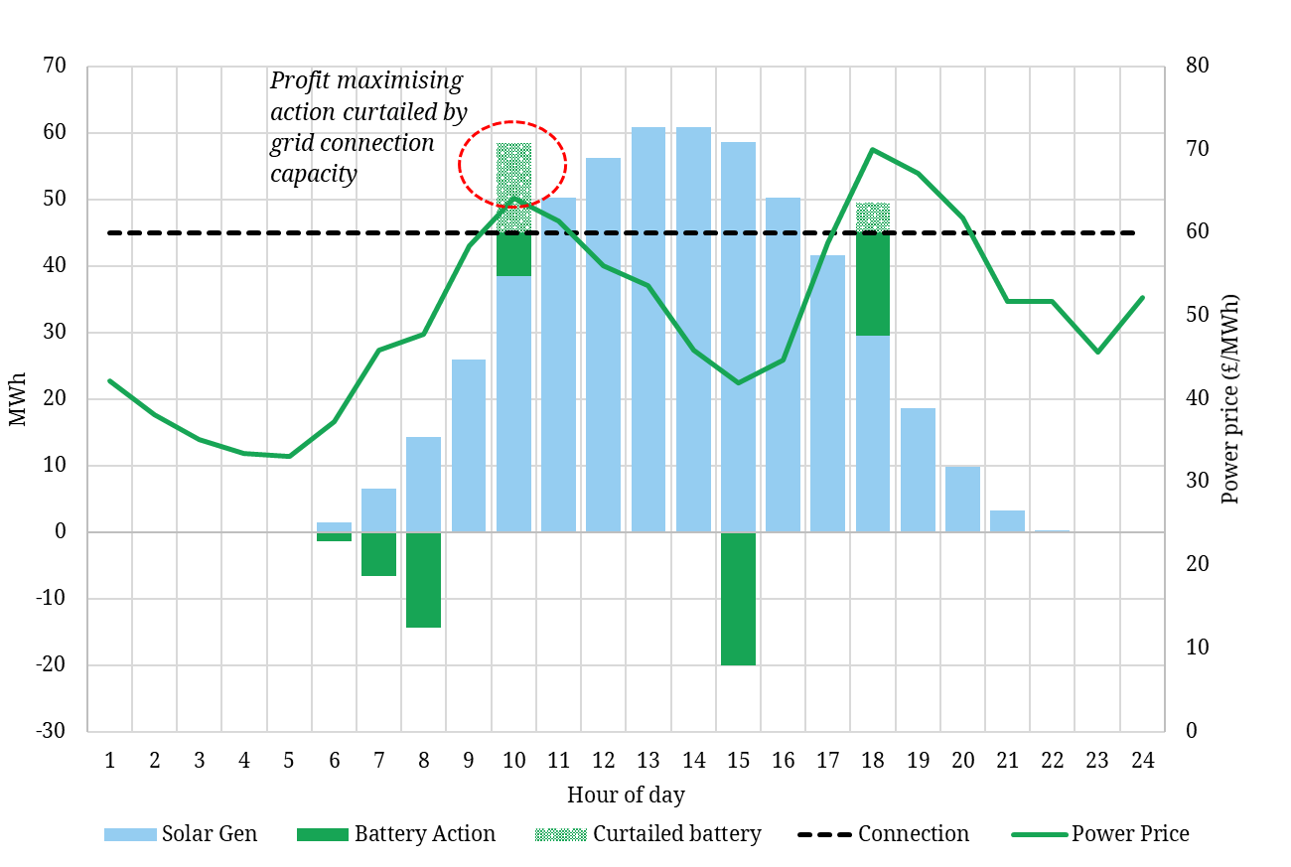 Chart 1 shows a typical solar profile (blue bars) against the DA power price (green line). Note: some solar production across the middle of the day is curtailed given it exceeds the grid connection size (blue bars exceed the black dashed line).

The battery dispatch pattern is shown via the green bars, charging in periods of lower price & discharging in periods of higher price. The battery’s discharge across the morning peak has been curtailed as the grid connection is not big enough to allow both the solar and the battery to fully discharge. Solar has priority over the battery in use of the connection, given curtailment of solar leads to lost energy (vs a battery’s ability to discharge in an alternative period).

The solar peak is marked by lower DA power prices and so batteries are not typically discharged across this period against DA prices. This helps to limit the negative value impact of colocating batteries & PV.

The DA example in Chart 1 is however only a small part of battery optimisation value creation. Batteries also operate across the WD and balancing mechanism (BM) markets, where similar curtailment issue can arise. DA prices tend to follow demand shape, whilst the WD and BM markets reflect the physical system state on the day.

In Chart 2, the system goes short across the middle of the day, leading to a spike in system prices. A stand-alone battery (with its own connection) would be well placed to capture this, but the co-located battery is curtailed by the priority dispatch of solar generation. 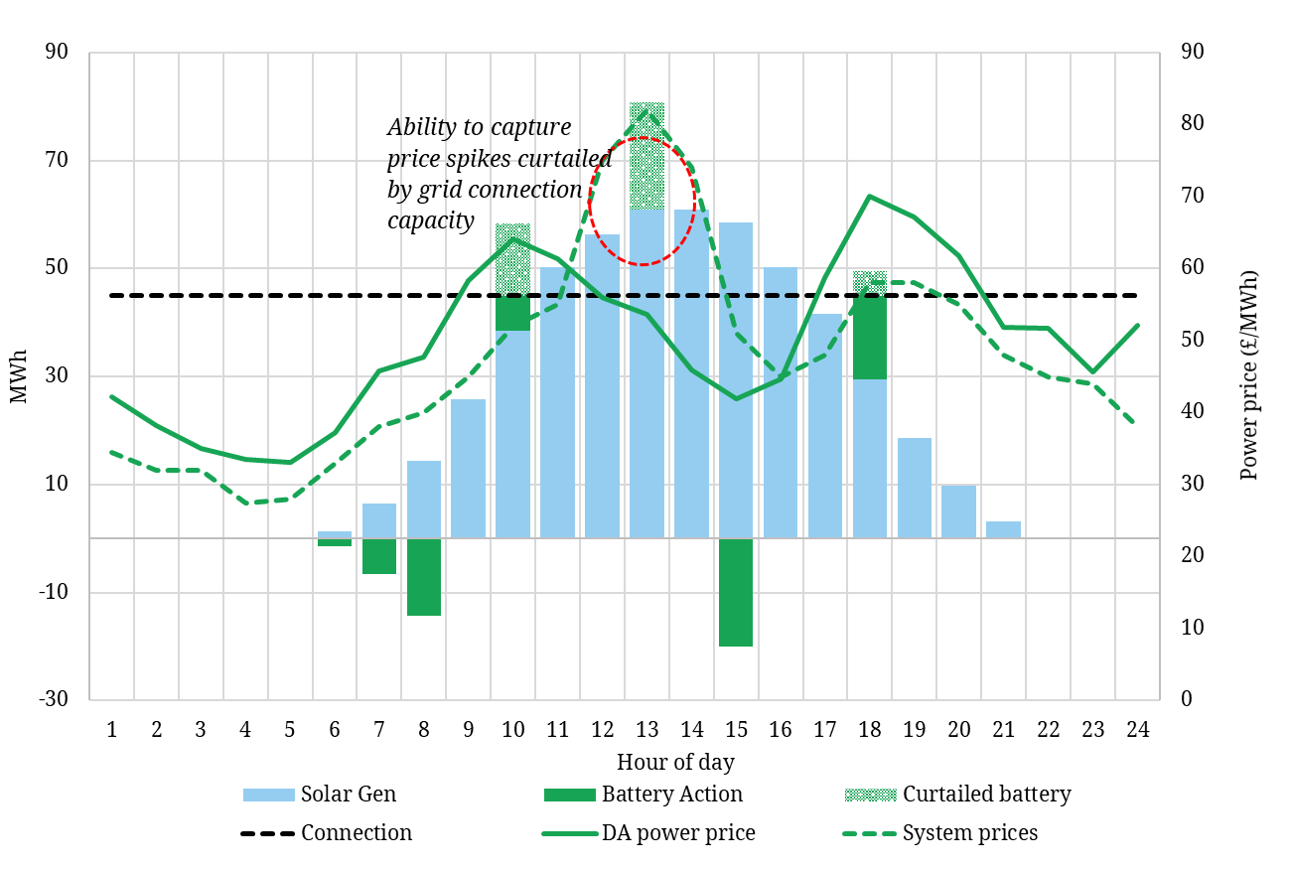 Effective battery sizing requires optimsing the level of interference between battery and solar, whilst at the same time maximising the use of the grid connection to capture energy margin. Quantifying optimal battery storage size is a key investment case value driver and relies on the stochastic optimisation of different sized batteries against correlated solar generation, DA, WD and BM price paths.

The first four drivers boost value of a colocated project. However these must be balanced against the fifth, the loss of battery energy margin from sharing a connection with the solar asset (as we show in Charts 1 & 2). 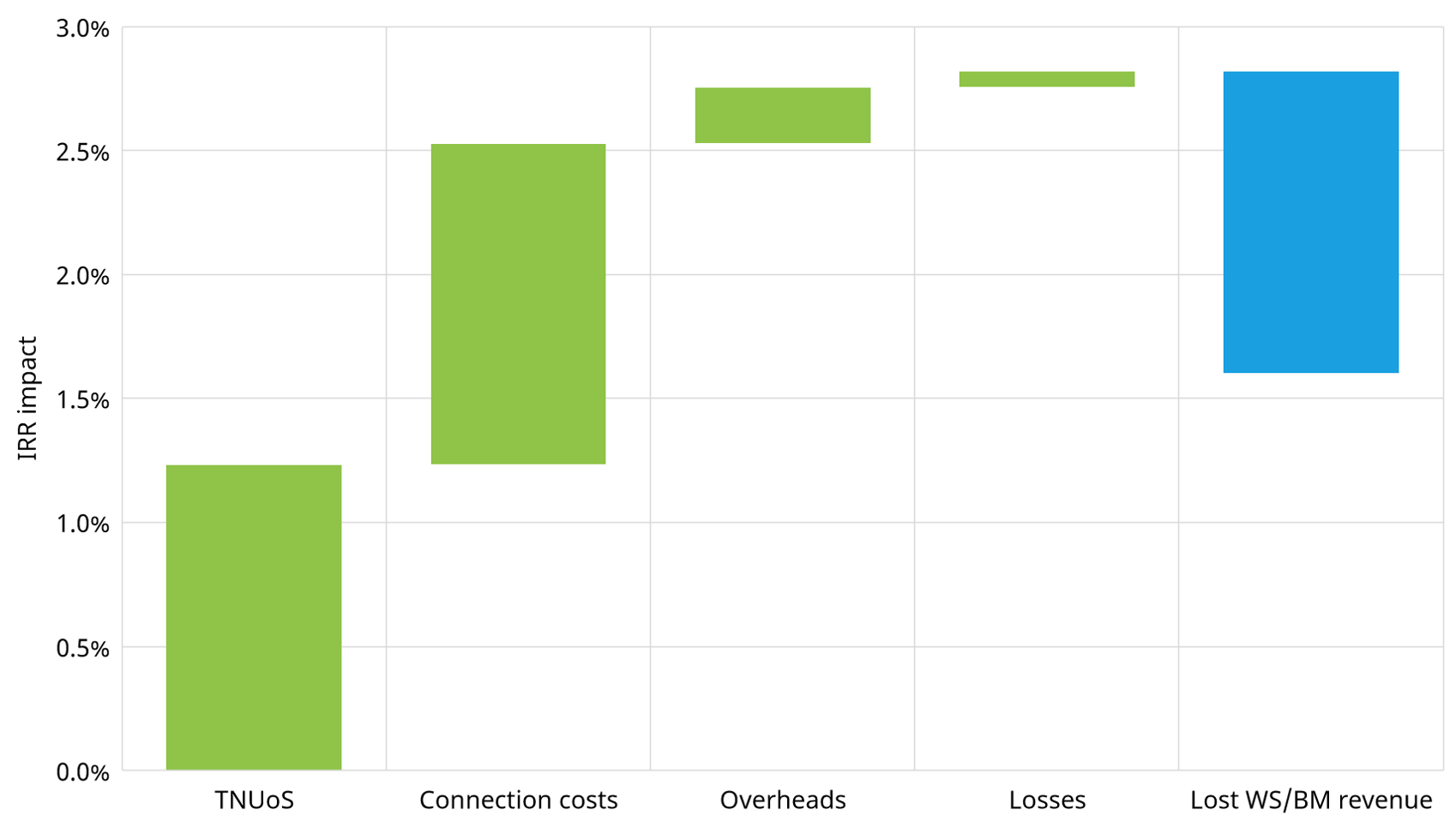 Is important to note however that the impact of co-location on project returns is not always positive and can vary significantly depending on location, connection costs and battery sizing.

Secondly, the impact on grid charges needs to be calculated. TNUoS charges vary depending on site export capacity, location and technology type and the addition of a battery to a solar site is likely to be treated differently to a stand-alone battery site.

Finally, and most importantly, the impact of co-location on energy margin needs to be calculated. As solar output varies from day to day, looking at a simple seasonal solar profile doesn’t cut it.