“Charter rates have more than tripled across the last 2 months”

We look at the drivers behind surging LNG charter rates

“Charter rates have more than tripled across the last 2 months”

One of the key challenges the European gas market has faced in 2021 has been the limited price response of LNG supply. Strong demand from Asia (led by China) has driven a premium of Asian LNG prices over Europe to incentivise sufficient supply flows to the Pacific.

Charter rate drivers & why they are surging

LNG vessel charter rates typically follow a similar seasonality to global LNG prices. This is because increased Northern Hemisphere winter demand and higher % supply utilisation acts to increase both (i) tonnes of LNG on water and (ii) tonne-miles (as more Atlantic supply is pulled into the Pacific to meet Asian demand).

Around this basic seasonal pattern, it is fair to say that spot charter rates can be very volatile as illustrated by Chart 1. 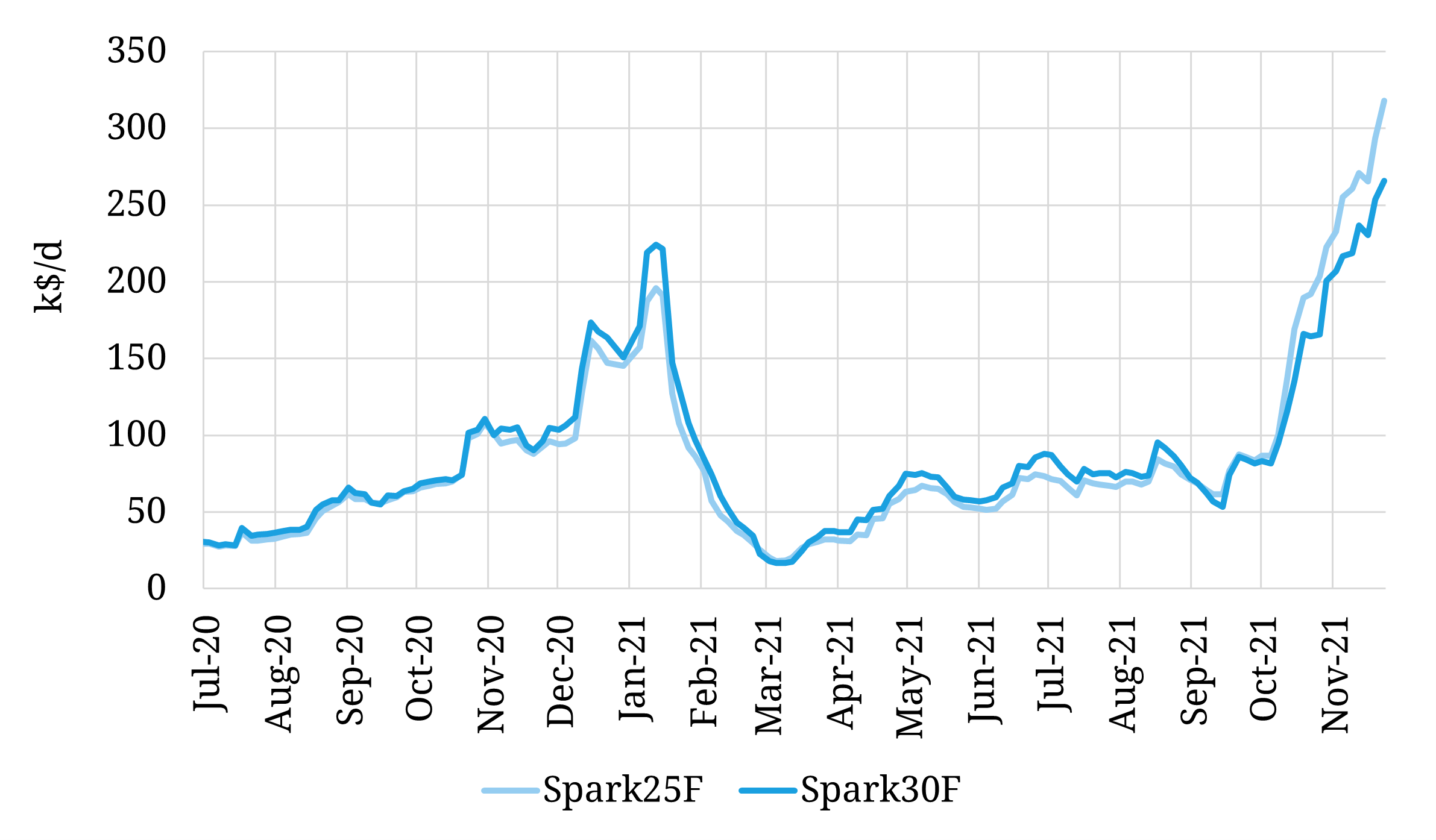 In Summer 2020 charter rates were on their knees. US cargo cancellations reduced demand for vessels against a backdrop of an oversupplied LNG market. Vessel fixtures were even heard of at zero $ per day charter cost, given sunk fixed costs and players trying to avoid variable costs.

Front month rates have been structurally higher in 2021 versus last year, as a tighter global market & higher netbacks have ensured that US cargoes do not need to be cancelled.

Chart 1 shows the scale of the most recent surge in charter rates that has taken hold since early October. Front month rates have more than tripled in the space of 2 months, breaking above peak fixture levels seen in the Jan 21 extreme cold snap driven scramble for cargos.

The latest surge in charter rates is being driven by:

Unless you are an LNG trader, this may seem interesting but a little obscure. However, charter rates have a much broader relevance given their impact on global gas prices.

There is an important circular interdependence between charter rate dynamics & underlying LNG market dynamics. This can be summarised as follows:

This plays out helping the market to rebalance, with higher prices also triggering demand response, reducing the requirement for physical LNG supplies (e.g., as can be seen recently with lower Indian imports).

These dynamics are clearly illustrated by recent price movements in the Jan-22 JKM-TTF price spread as shown in Chart 2.

Chart 2: US shipping differential for Asia vs Europe, against JKM-TTF spread 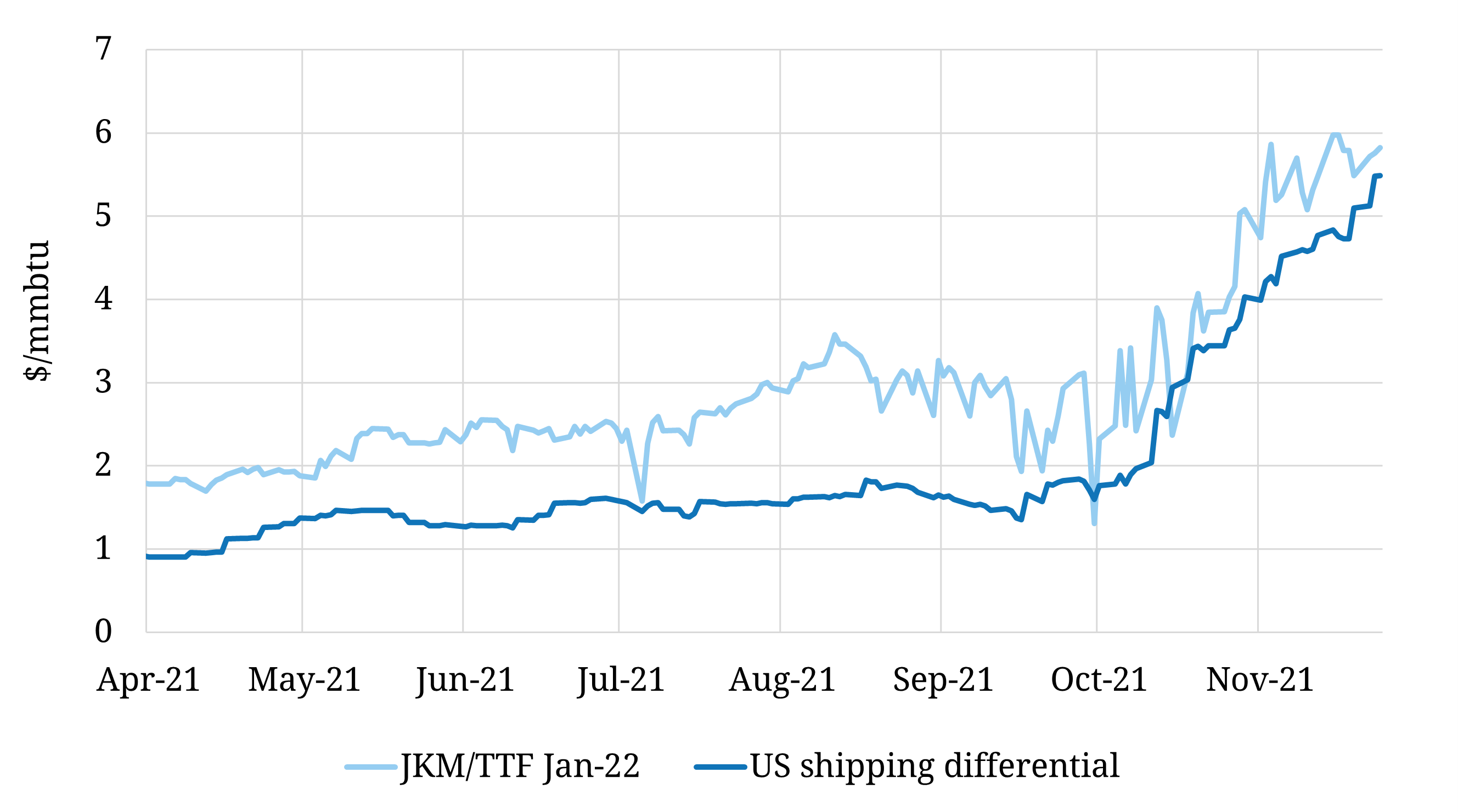 The JKM-TTF spread for Jan-22 delivery has rocketed from 2.3 $/mmbtu at the start of October to 5.7 $/mmbtu, an increase of around 250%. The charts shows a close relationship to the recent surge in the shipping cost differential of delivering a US gulf coast cargo into Asia vs Europe.

There are two factors driving up the cost of moving US cargoes to Asia:

The latter is the result of LNG market being caught up in broader shipping constraints as canal capacity is inadequate to meet vessel demand. Canal waiting times have ballooned to over 18 days since the start of Oct. At these waiting times, the surge in charter rates is equivalent to an almost 4 $/mmbtu increase in the shipping cost differential for a US cargo delivering to Asia vs Europe (typically the marginal balancing molecule).

While there are additional factors that can be taken into account (e.g., voyage routing via the Cape of Good Hope, floating into Month+1), the US shipping differential helps to a large degree to explain the increase JKM-TTF price spreads.

Importance of robust treatment of charter rates in LNG analysis

The current market situation we set out above illustrates how important charter rates are in driving LNG market prices and price spreads. Yet charter rates are often treated relatively simplistically in LNG market, asset & portfolio analysis (e.g., as a static input assumption).

We see the effective capture of charter rate vs market price dynamics in LNG analysis as a key driver of competitive advantage. Without proper treatment of these interdependencies, money is left on the table when valuing and optimising LNG portfolios.

This is why we take into account the relationship between charter rates & LNG pricing in the pricing logic of illiquid LNG spot markets in our LNG Bridge model. And why we are working on developing fully correlated simulation of charter rates & prices in LNG Bridge’s Monte Carlo price simulation engine.

Drivers of the JKM vs TTF price relationship

We look at the key marginal drivers of Asia’s benchmark JKM LNG price and how this interacts with and influences European gas prices.
Read more
Featured Article
11 Oct 2021

Can the UK decarbonise power by 2035?

We look at 5 implications of the UK’s new target to decarbonise its power sector by 2035.
Read more